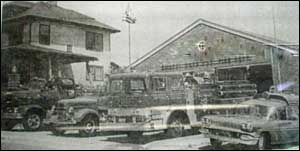 In August 1946, a tragic fire took the lives of three children in a Deanwood Park residence. The parents of the three children could only stand by and watch as the home burned. The house was located on Eastern Avenue, which borders the District of Columbia. At that time, the District Fire Departments hose connection was not compatible with Maryland's fire hydrants. By the time the Maryland Fire Department units arrived, it was too late. Soon after the fire, a group of concerned citizens established a volunteer fire department to better serve the needs of the Greater Chapel Oaks/Deanwood Park area. With no money or experience the volunteers borrowed used equipment and leased a garage from Mrs. Elanor Dodson for $1.00 per year. 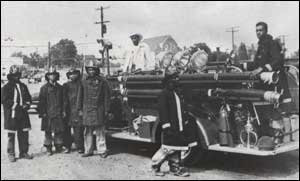 Unfortunately there was a short circuit in the siren that was donated from another company. This caused a fire that would consume the entire building. Not to be dismayed, this group of dedicated volunteers rebuilt a small cinderblock building. They mixed the mortar and laid the bricks themselves. They had no heat and had to place burlap bags on the floor to keep their feet from freezing. In late 1956 their lease on the property ended and the volunteers had to relocate.At this time all they had was a used truck, purchased from another company. In 1957 all companies were required to maintain two Class A Pumpers. Having only one truck, the volunteers donated money to purchase a second truck. One volunteer used his gas station as collateral and nine others took out second mortgages on their homes. The volunteers sold newspapers, held carnivals, bake sales and cabarets. Later that year they purchased a new 1957 FWD Pumper. In the same year, Mr. Charlie Lancaster acquired property at 5412 Sheriff Road. Shortly they began construction on a new building. Unfortunately a dump truck backed into the building and brought half of it down. 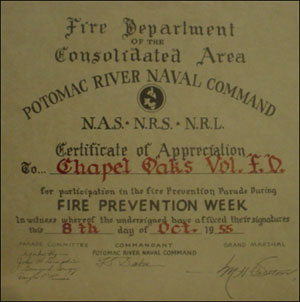 It seemed that the volunteers had to jump a new hurdle every week, but the Black community helped them over the rough spots. Our roots are strong and we have a good foundation. In December 1957, our long ordeal was nearing the end and we finally moved into our new firehouse.

From 1957 to 1963, we concentrated our efforts on recruiting and training new volunteers. A new siren was put in service to summon a new generation of volunteers.

There were numerous racial incidents from the surrounding white engine companies. Cutting off water supply, spitting on the Black volunteers and while in a burning building tried to hold down a Black firefighter until his air supply would run out. Orders from a Black firefighter were ignored by White firefighters, while on a working incident. The word "Nigger" was heard quite often, but the volunteers of Chapel Oaks persevered.

As the standards changed the volunteers had to up grade their pumpers. This change came from the Volunteer Fireman's Association's. Each station had to have two 750 GPM pumpers or better. The volunteers put their houses up for collateral and got a loan from Suburban Trust Bank.

In 1980 Prince George's County built a new station. Things were changing and Chapel Oaks Volunteer's were changing too. With the volunteer staff increasing, hall rental functions, and Safe Kids Day given in May, has bought Chapel Oaks recognition in the community.

Our plan for the years to come should be to work together with the same dedication that our "Founding Fathers" had.